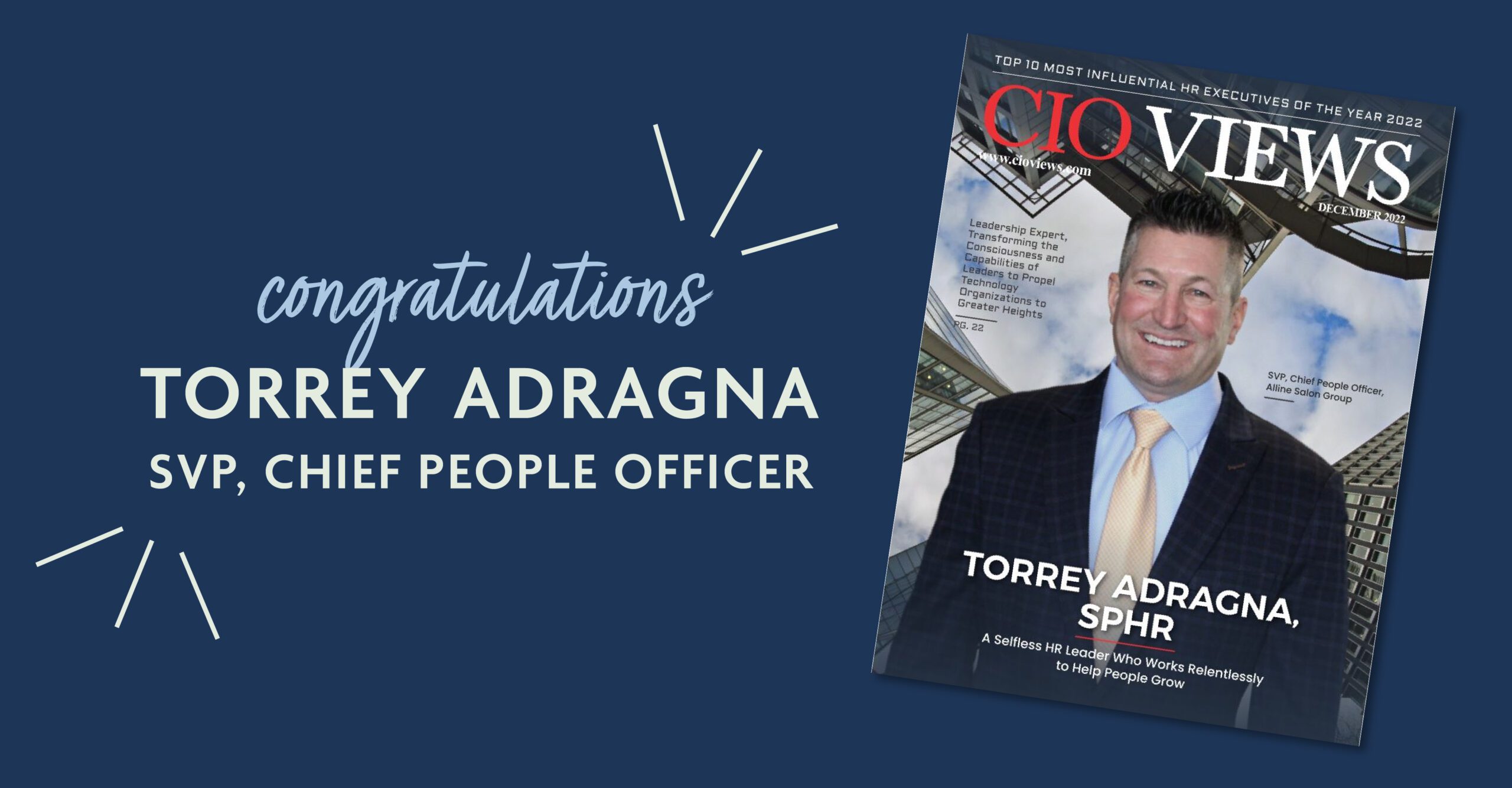 Alline Salon Group’s SVP, Chief People Officer Torrey Adragna was recently featured in C10 Views Magazine as a Top 10 Most Influential HR Executive for the year 2022. CIO Views is a business magazine that focuses on emerging CIOs, their journey, views on current economic states and all other relevant subjects that refer to the business world.

After joining the Alline Salon Group team in February 2020, Torrey had to instantly navigate an unprecedented shutdown due to the COVID-19 pandemic. It was during this time that he showed his ability to be flexible, strategic, and always put our people first. We encourage you to read the full article below to learn more about Torrey’s journey to the human resources industry, and what he values most about his job and working for Alline.

Congratulations, Torrey, on this well-deserved recognition as a Top 10 Most Influential HR Executive!

Torrey Adragna, SVP and Chief People and Culture Officer at Alline Salon Group is truly an influential leader in every sense of the word. He identifies talent even in the most unlikely of places and provides them the opportunities to unlock their potential and grow. As a mentor, Torrey equips his protégés with the confidence and skills needed to succeed. For many, they experience progressive advancement and attain leadership positions. Empowering them to develop, improve, and grow in their careers is an extremely rewarding accomplishment for Torrey, who has mentored many individuals over the years.

Early in his career, he defined success in terms of personal accomplishments. As his career has matured, Torrey’s primary focus is on the success of his team and the organization. He takes a lot of interest and pride in propelling his teammates towards excellence. Torrey firmly believes that the right team is paramount to success. For him, doing the right things, listening, challenging, and developing them is the highest level of achievement, especially in a time when it is extremely tough to hire and retain talented individuals.

Just over 2 years ago, Torrey was out to dinner with his family celebrating his daughter’s birthday. On this night, he met a gentleman that happened to be their waiter – Torrey too had once waited tables. He had an aura about him and a great personality, which prompted Torrey to initiate a conversation. His focus was to learn about the person behind his talents, and his personal goals. When he discovered that the gentleman had just graduated from Oakland University with an HR degree, Torrey gave him his business card and asked him to reach out if he was interested in working on this team. Interestingly enough, Torrey paid for college by working in the food service industry and is also an HR graduate of Oakland University. The parallels were undeniable. Later, after an interview, Torrey offered the gentleman an internship opportunity at Alline, where the gentleman went from being an intern to becoming an HRCI PHR (Professional in Human Resources) Certified HR Representative within two years.

Torrey recalls that on his path to graduation from Oakland University, he did fieldwork as well as an internship. During those experiences he developed long term relationships and learned the invaluable gift of mentorship. At that time, he committed to himself that he would offer such opportunities to others once he became an HR leader. In his first position, Torrey invested in hiring two interns, both from Oakland University. He also dedicated himself to the challenge of earning his HRCI SPHR (Senior Professional in Human Resources) Certification.